If you live in South Florida, keeping the name and phone number of a South Florida Public Insurance Adjuster is a great idea.

While you may think you don’t need a South Florida Public Insurance Adjuster because your insurance agent said “We have adjusters” this article will open your eyes. 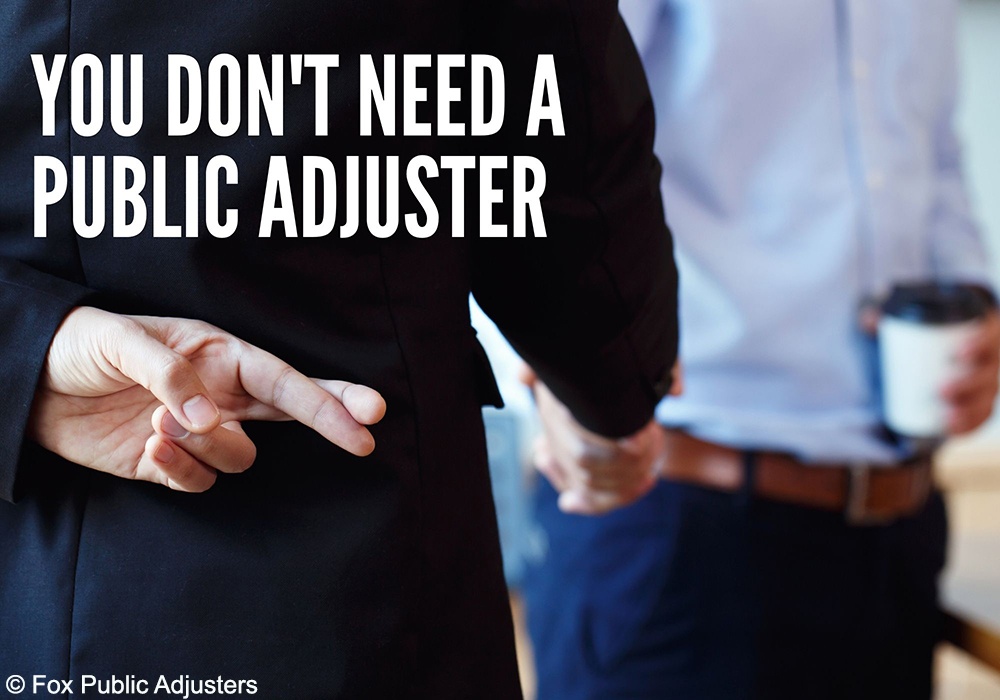 Here in South Florida bad weather and home damage comes with every hurricane season.  It’s not just in the form of hurricanes.  Lighting storms, heavy winds, floods, sinkholes and the fact that this is a very humid environment all contribute to home damage.  While the chance that you’re particular home will suffer major damage is could be slim, having home insurance is a must.  As a matter of fact, home mortgage lenders usually require a homeowner’s carry insurance.   The concept that many home insurance premiums will cover the cost of a small number of home damage victims makes perfect sense.  However, for many insurance companies the numbers don’t add up to enough profit.   The insurance industry is funded by invested premiums earning interest, and the idea that fewer homes have serious damage.  Since most insurance companies are publicly traded, they are also expected to return profits to the shareholders.  When you look at the big picture, insurance companies need to make huge profits.  They can’t simply fork over money without trying to reduce their bottom line.  This means that paying high home damage settlements is not in the insurance company’s best interest.  As a way of reducing the settlement amount, many insurance companies resort to denying claims or offering a minimum settlement amount.

For most South Florida homeowners, knowledge of insurance company practices is like speaking a foreign language.  Insurance companies have their rules, forms, documents and methods, which all determine your settlement amount, or determine if you even get a settlement at all.  I can’t tell you how many times homeowners in South Florida have said, “I’m not worried, I’m insured.” only to find out that, you are insured, but your deductible is so high that you won’t receive a penny.  Other times homeowners learn that they are covered for one thing but not another.  Since the homeowner is not knowledgeable about insurance practices, they often miss out on receiving a worthwhile settlement.  When a South Florida homeowner is facing home damage, they usually call their insurance agent first.  Next the insurance agent sends out the insurance company adjuster.  This is often where the problems starts, and it starts with either an outright denial or a lowball offer.

Public Adjuster to the rescue!  Wouldn’t it be a much better idea to have an insurance adjuster who is 100% committed to your best interest?

Below are a few stories about how South Florida homeowners have been offered tiny settlements to cover their huge home damage expenses.   In one case, the homeowner received a flat out denial.  In every case, a Public Insurance adjuster in South Florida was able to change the denial or dismal settlement offer into a healthy settlement.   In our over 25 years of working in the home damage insurance business we have developed and unparalleled understanding of the insurance industry and how company insurance adjusters operate.  If you want to receive the highest possible settlement call the best public insurance adjuster South Florida give us a call at (561) 789-4369   There are plenty of reasons why Fox Public Adjusters is your best choice.  Later in this article I’ll break down just what makes us your best choice.

Stories from the past.  During our years as a Public insurance adjuster in South Florida  we have handled a multitude of home disasters.

Even though all these homeowners thought they were well covered, their insurance companies taught them otherwise.

A settlement too small.

When hurricane Irma hit South Florida in September of 2017, it packed strong 110-mile winds. While not the strongest hurricane to hit the area, it blanketed South Florida with heavy rain, strong winds which caused extensive damage.  Even the smallest roof leak turned into serious water damage.  In one case a homeowner was offered a settlement, which was less than the insurance deductible.  The small settlement meant that the homeowner received no money from the insurance company.  During the insurance company’s inspection, it seemed like the adjuster was prepared to offer a large settlement.  When the homeowner receives the settlement letter, they were floored.  That is when they called us.  During our inspection we found damage that the company inspector missed.  We also found additional damage that was hidden from plain view; this additional damage was an indirect but related result of the Irma’s destruction.  After, reopening the claim, we were able to negotiate a settlement that covered all the costs involved in restoring the home to pre-Irma condition.

A Homeowner cruise vacation ends with a water damage nightmare.

While on a Caribbean cruise this homeowner received an urgent message from a neighbor.  The message said water is pouring out of their homes garage door and running down the driveway.  Not knowing what to do, they called their insurance agent.  The agent told them everything will be ok and they were covered.  The agent sent out the insurance company’s preferred water damage contractor.  When the homeowners arrived home they found that the source of the flood had been found and the water turned off.  However, no pictures or video of the damage was recorded, and without proper documentation of the insurance company tried to deny the claim.  Had the South Florida homeowner called a Public Insurance Adjuster, proper pictures and video would have been taken and the situation would have been handled properly resulting in a much better out come.  As a South Florida public insurance adjuster, we are obligated to make our case to the insurance company.  In this case the preferred service provider simply, found the leak. Shut off the water, did a little quick clean up job and left the rest for the unfortunate homeowner to deal with.

Often insurance companies will have a knee jerk response to home damage.  In one recent case a washing machine in a homes laundry room malfunctioned and created a room full of rising steam.  The steam soaked into the walls and ceiling causing the surfaces to become saturated and discolored.  When the company insurance inspector inspected the home, the claim was denied because steam damage is not covered.  A Public Insurance adjuster in South Florida who had to explain that seam is another form of water reopened this case.  Therefore this is a water damage claim.  This many sound really silly but it seams that some insurance companies will simply deny a claim; simply hoping the homeowner goes away.

When you consider the complicated claims process, and the fact that having knowledge of construction, knowledge of water damage, as well as knowledge of mold, fire damage, storm damage and more, is needed to be a successful South Florida public insurance adjuster, hiring a public adjuster becomes an obvious choice.

At Fox Public Adjusters, we have this extensive knowledge.  Over our years in business we have made it our priority to know every tiny nuance of the insurance clams process.  Why?  Because in our industry, whoever is more knowledgeable, is going to win a higher settlement.  While most insurance company adjusters are over worked, and rushing from damaged home to damaged home, we are honing our skills and knowledge.  READ:  Burned out insurance adjusters. 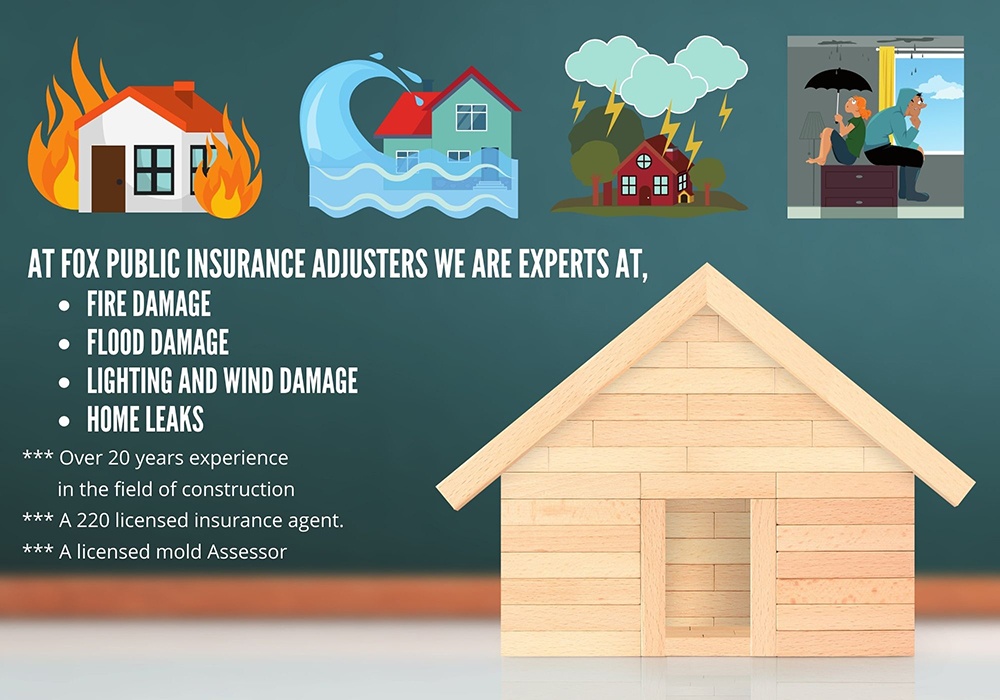 By the way, we are based in Boynton Beach, and serve all of Broward County, Palm Beach County, and Martin County.   If you are suffering with a home damage, and need help call Fox Public Adjusters at (561) 789-4369