When faced with home damage from a flood, fire, storm or hurricane calling a public adjuster in Florida is the best choice for receiving the best settlement.

In almost every aspect of life people rely on items, services and products to deliver a certain result or outcome.  For example, it’s reasonable to expect a new car to perform worry free for a certain length of time before any problems occur.  At a restaurant, guests expect their order to be correct and served within a certain time frame.  However, in life not everything works as expected.   In some cases it’s not a big deal, in other cases it’s a huge problem.  In addition some of these mishaps are the result of bad service or a defective product.  In other cases, it’s just bad luck.  Often when an item or service is purchased, especially an expensive one, there is some sort of a warranty.  This warranty almost always includes a limited time frame, and covers only certain parts of the product.  For example, an auto warranty may cover the engine, bit not worn tires.

For most people their home is their largest purchase.  Not only is a home expensive, it’s also the place that provides shelter and protects all of a family’s personal items.  Aside from new home purchases, in most cases, homes do not come with a warranty.  People who purchase a pre-owned home know they are purchasing the home as is.  Because pre-owned home sales usually don’t include a warranty it’s very important that the homeowner have the home inspected before the purchase is finalized.  Sometimes during the inspection a home inspector may find signs of water damage, signs of mold, potential plumbing problems, roof problems and a wide range of other issues that could lead to a disastrous and expensive problem in the future.

As a way, to ensure that these unexpected problems don’t become so costly that they can’t be remedied using the homeowners emergency fund, homeowners turn to home  insurance providers.

Like any business, an insurance provider needs to make a profit in order to exist and provide a valuable and needed service.  In addition, simply existing is not the end point for insurance companies.  Today’s insurance companies are judged by how much profit they make and whether or not they can reward company shareholders.   In order for insurance companies to reach their goals they rely on what amounts to a numbers game.   This numbers game requires many participants and works by having many pay for the mishaps of very few.   For example, if 1000 homeowners pay an insurance company, and only several homeowners are faced with home damage, the payments made my the 1000 homeowners will more than cover the money paid out by the insurance company to repair the few with home damage.   The value of insurance companies can’t be understated.  In life no one family or person should ever face the prospect of being completely wiped out as a result of a situation that is completely out of his or her control.  As a matter of fact the first insurance company started in 1732 and was started as a result of fire damage that would usually result in complete destruction of the average building. 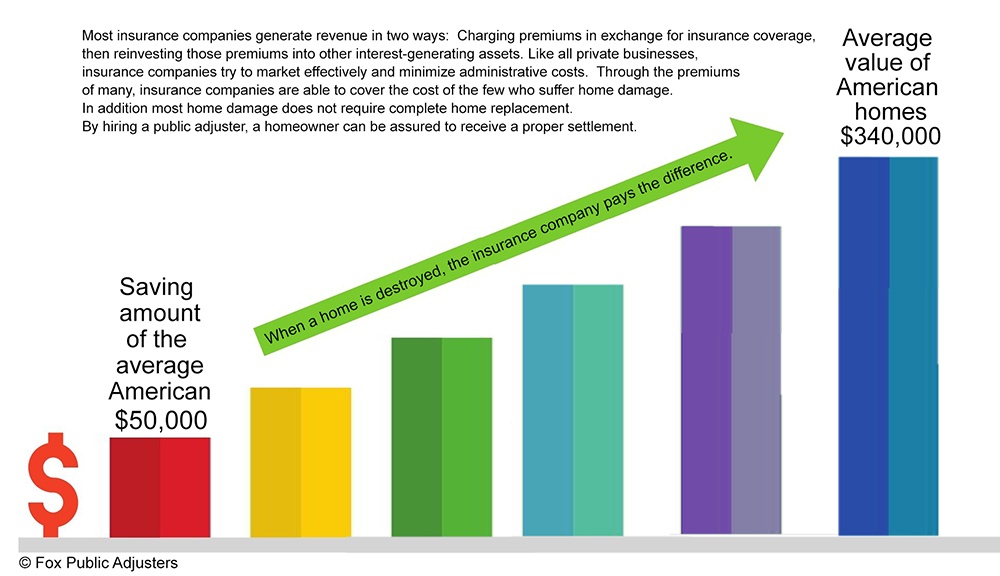 Even before the first insurance company started, societies worked to manage damages from unexpected mishaps.  In China farmers had to deliver produce down the Yangtze River to market. During this journey some of the boats would face unexpected challenges.  Some would be robbed, others would fall victim to the rapids and some of these boats had their produce eaten by wild animals.  As a way of managing any potential major loss the produce was taken down the river on many different boats.  Had the farmers put all their produce into one boat the market would have to face the chance that they could loose an entire shipment, this was the first recorded attempt at insuring against total loss.

Whenever a contract or in this case, insurance policy terms are needed there are always disagreements.  Even in the case if a business or family who decides to self-insure, someone must decide what funds are set aside to pay losses and what when a loss can’t be paid out of the mishap fund.  For example, if a grandson receives a traffic fine, it’s up to the grandson to pay that fine out of his pocket.  He shouldn’t be allowed to pay the fine with home disaster money set aside for an unexpected expense.  If this happened in a company, the accountants would have fit.  The point is, without rules, an insurance company simply won’t work.

Given the wide range of home damage occurrences it only makes sense that disputes will arise. For example, if a tree branch hits a roof and creates a hole, the homeowner can enter an insurance claim for the roof damage.  However, if the insurance company inspector determines that the roof is very old, the insurance company’s agent may ask, why should the homeowner receive a new free roof when it’s so old.  The homeowner could argue that the roof could have lasted another 5 years.  Now the question becomes one of fix the hole, or replace the roof? What if the tree destroys the entire roof, or if the roof is only 8 years old?   In other cases, a tree may create a tiny hole that results in a mold situation?  The homeowner may not have known about the leak until the result is serious home damage.  It could then be argued by the insurance company that the homeowner should have inspected the roof and found the hole before any serious roof damage occurred.  The result could be a denied claim.

Who makes the rules? When it comes to insurance claims.

In a world where one company makes the rules, then decides which rules apply and which don’t,  problems are bound to happen.  In older times these problems were sometimes handled with the beating over the head with a club.  Today, we have laws and regulations.  Insurance companies can’t decide which rules apply and which don’t based on their profit margin.   Because most homeowners are not skilled at deciphering contracts, and are not trained in law, they are sometimes left at the mercy of the insurance company.

What does a Public Adjuster in Florida “adjust?”

The word adjuster refers to investigating the damage, evaluating the cost of repairs to satisfy the homeowner, negotiating the claim and making sure the insurance company “Adjusts” the settlement correctly based on the insurance company’s contract and the law.  Since most homeowners, without the help of a public adjuster, are not highly skilled in this area, they often take the settlement that is given to them.  However, with the help of a public adjuster, those settlements are almost always “Adjusted” to a much larger amount.  Statistics show that by hiring a public adjuster, the average claim settlement is increased by over 600% percentage.

Claim denied?  A public adjuster in Florida can re-open a denied claim and help the homeowner receive a proper settlement.

In some cases an insurance company can flat out deny a claim.  If they evaluate a home’s damage, and decide that the damage does not apply to their contract, they can deny the claim entirely.  After interviewing some homeowners with denied claims, it almost seems that denying insurance claims is a standard practice.  Often an insurance claim is denied because the company insurance adjuster doesn’t clearly understand the contract and just denies the claim.  Other times it’s to save the insurance company money.  One thing to keep in mind is this; Florida public adjusters become more successful by understanding contracts and the law.  For a public adjuster, knowledge of insurance contracts and the law is needed to be effective.  In addition a public adjuster must also be skilled in home construction, water damage and mold removal.  Most public adjusters in Florida spend countless hours learning about insurance contracts, and how an insurance company work to offer a lower settlement.  At Fox Public adjusters we have attended countless seminars, workshops and obtained additional licenses in areas such as mold removal, home construction, and toxic chemical removal resulting from fire damage.  As the best Florida  public adjuster, we also have invested in the most sophisticated equipment needed to detect water damage, mold and other home hazards.

For most company insurance adjusters, the bar is much lower.  So with this understanding, who should handle your home damage insurance claim?

If your home has suffered home damage from a storm, fire, flood or hurricane, call us at (561) 789-4369  We are based in Boynton Beach and handle insurance claims in Palm Beach, Broward, and Martin Counties.  In the past we have helped homeowners in West Palm Beach, Jupiter, Palm Beach Gardens, Lake Worth, Delray Beach, Boca Raton, Pompano Beach, Fort Lauderdale, Deerfield Beach, Stuart, Port Saint Lucie, Parkland, Wellington, and many other towns in South Florida.