If your home suffered damage from a storm, hurricane, broken plumbing pipe, lighting strike or any other unexpected event, and your home or property insurance company denied your claim we can help.  Under paying and denying home insurance claims is one way that some insurance companies save money, and maximize profits. Palm Beach County denied home damage claims happen often.   As a Public Adjuster who serves Palm Beach County, we will visit your home, re-open your denied claim, and get you the settlement you deserve.  Many home insurance companies will over look certain types of home damage as a way of minimizing insurance settlements.  Just because some home damage is not visible, that doesn’t mean the damage doesn’t exist.   Helping homeowner recover insurance settlements that cover the total cost of repairs is our job.  We are also skilled at making the insurance claims process less stressful for the homeowner.

According to statista.com Berkshire Hathaway’s 2019 revenues amounted to over 254 billion dollars.  With all this money coming in why do insurance companies still want to deny claims or underpay settlements?  It’s simple; they have shareholders that want to partake in the company profits.  Some insurance companies pay nice dividends on a regular basis.  If you are not familiar with dividend paying stocks, a stock that pays a dividend, means that the shareholder gets a part of the insurance companies profit every period.  Investors who own dividend paying stocks expect to collect their money on a regular basis, simply because they own the stock.  For example one well-known insurance company that claims you are safe in their hands currently pays a 2.34% dividend. That may not seem like much, however for a shareholder with a large stake in the company, it’s a huge amount.  In order to maintain this dividend, a stock must have a continuous flow of profits.  Let’s also consider the fact that in addition to paying shareholder dividends, investors want to see the value of their stocks rise.  Check out the stock chart below.  Impressive isn’t it?

When we get a call from a disgruntled or upset homeowner, it is often a result of an insurance company that either under paid or denied a claim.  Working as a Public Adjuster Palm Beach County, we find our home damage calls for help, come from all over the area.  On any given day we could receive a call from, Boynton Beach, Boca Raton, Delray Beach, Palm Beach, West Palm Beach, Jupiter, Wellington, Royal Palm Beach, Lantana, Lake Worth or any other town or community in Palm Beach County.

Most of the time, we find that the insurance companies adjuster, only repaired the obvious visible damage, leaving the much more extensive hidden damage for the homeowner to accidently find and deal with at a later date.  Here is an example of how this scenario play out.  During a hurricane in Palm Beach County, a homes roof tiles become dislodged and fly off the homes roof.  Having become projectiles, the roof tiles hit and damage other parts of the roof.  The impact of the flying roof tile cracks other parts of the homes roof leaving a crack either on the roof or the homes exterior wall.  The insurance company’s adjuster, makes a visit to the home and the insurance company pays to replace the broken roof tiles.  Many insurance companies work with what is known as a preferred service vender.  This means that there is a cap on the amount of money the repairperson is allowed to charge when performing the home repairs.  Given the cap, the preferred service repair vender is only able to replace the broken tiles, repaint a wall and make the home look repaired.  What the preferred service repair vendor should also do is, wet the roof, and then check inside the homes attic for any leaks.  This act of confirming the work is done correctly often gets over looked.  Then many months later, as water slowly penetrates the roof, through the damaged roof membrane, mold starts to grow.  As the mold grows, it eats away at the roofs structure.  Eventually, contaminated water enters the home at a more rapid rate and the homeowner discovers the leak.  Check out this article on how a roof crack and leak in one location of your home could cause damage to another part of your home.  Home water and roof damage article   When the insurance company is called many months later, the homeowner is told, the roof leak is simply due to the age of the roof.  Now the homeowner is stuck with a huge bill.  As a Public Adjuster in Palm Beach County we see this situation playing out with a wide variety of home-related damages.  It’s not just roof damage that gets denied or underpaid.  This happens with plumbing issues, appliance damage issues, lightning strikes and more.   To learn more about how mold grows read our article on Mold removal in Palm Beach County.

Why should you call a Palm Beach County public adjuster first?

When you home is damaged there are many reasons why your first call should be to a public insurance adjuster.  The first and most compelling reason is simply due to the fact that a public adjuster works for the homeowner, and NOT for the insurance company. Because insurance claims for Palm Beach County home damage are often denied, most of the calls we receive result from homeowner who’s claims were either underpaid or dismissed at not valid by the insurance company.  or At Fox Public Insurance Adjusters, we will not only document and repair the obvious, we will also find, repair and prevent any future damage that will occur years or months later, as a result of the initial damage.    The second reason why you should call a public adjuster is because of the well-documented fact that in general, public insurance adjusters result in homeowners receiving a substantially higher payout amount.  According to statics, a public adjuster could result in an increased settlement amount of 747% Just look at the chart below. 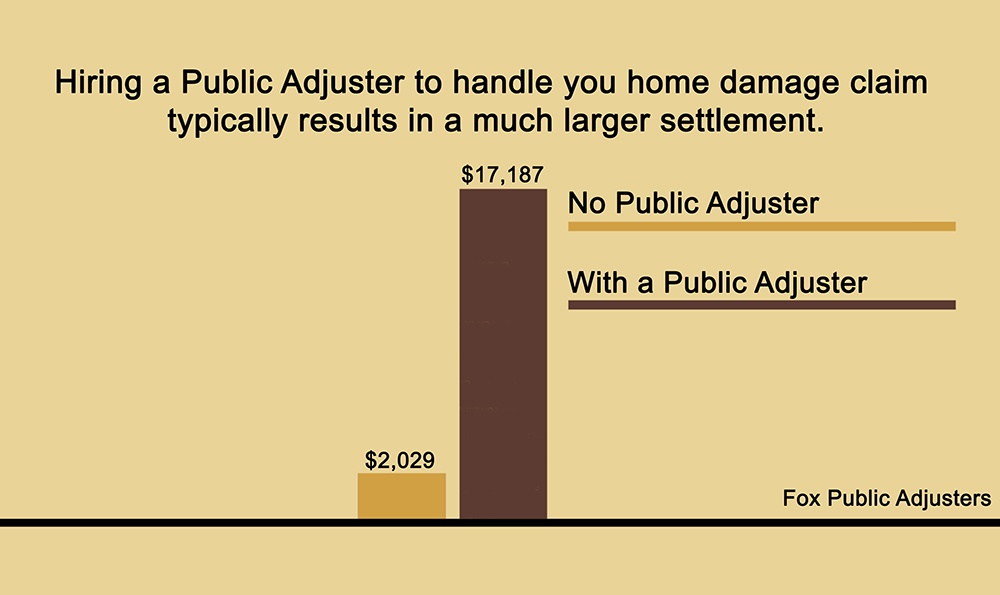 The third reason to call a Public Adjuster in Palm Beach County first has to do with the amount of time you will save, and the lower amount of stress you will experience during the entire process.  As a public adjuster we are experienced when it comes to handling insurance claims.  In the past we have saved South Florida homeowners months and in some cases, years of dealing with the back and forth process of settling a home damage claim.  By handling your home damage claim properly at the first discovery of home damage, the chances of having your claim denied are greatly reduced.  Trust me when we say, avoiding an insurance damage, denied claim, is in any homeowners best interest. If are facing Palm Beach County home damage call us at (561) 789-4369

By calling us first you can save money and lots of avoidable stress.

As stated earlier, any of our incoming calls come from Palm Beach County homeowners who feel like they have no other place to turn for help.  Their insurance company denied their claim for any number of reasons.   Insurance companies offer a wide range of add-on elements that are not included with a standard policy.   A homeowner, who is covered for roof damage could be told that, even though the roof damage is covered, the mold that resulted isn’t covered.  Of course, had the insurance companies inspector done a thorough job in the first place, there wouldn’t be any mold.   In addition, some insurance companies have exclusions which many policy holders are not aware of.  Imagine, your home is damaged and you think you are covered, only to find out your claim is denied because you policy has an exclusion that you were not aware of.  Many times homeowners, find their claim was denied because they did not submit their claim correctly, or they submitted the claim in such a way that provided the insurance company an opportunity to avoid paying the claim, had the homeowner submitted the claim differently it would have been covered.  As a Public Insurance Adjuster in South Florida we know the proper way to submit a claim so that it gets paid the first time.  The stress and aggravation of having a claim denied could be avoided by submitting the claim properly at the start.    One of the more common reason home insurance claims get denied is that the amount of damage is less than the deductible.  If an insurance company minimizes the cost of the damage, or if they over look any additional damage, which resulted from the initial damage then it’s easy for an insurance company to tell a Palm Beach homeowner, “It’s not worth submitting a claim”.  It becomes a saturation in which, the homeowner gets stuck paying to repair the initial damage, then later having to pay for the resulting additional damage down the road. 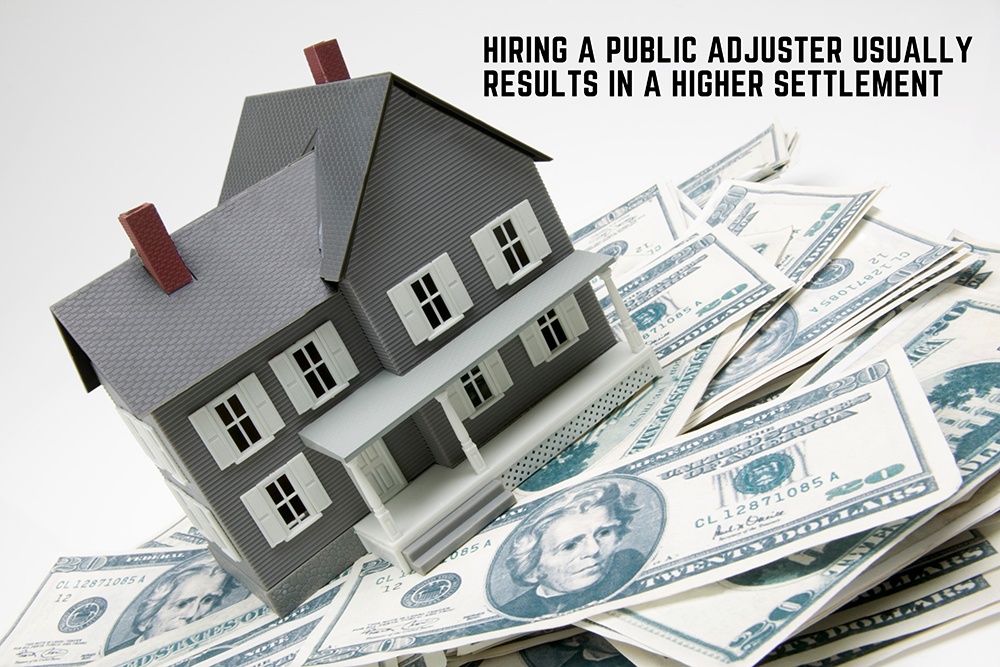 Fox Public insurance adjusters doesn’t just serve Palm Beach County, our services also include Broward and Martin Counties.   We are based in Boynton Beach at 1263 Gondola Ct, Boynton Beach, FL 33426   If you have suffered home damage, as a result of a hurricane, flood, broken pipe, storm, fire, vandalism call us for a free home inspection.  We could be reached at (561) 789-4369