As a public insurance adjuster in Palm Beach County, we have seen a huge increase in cast-iron plumbing problems.  The tropical environment of our area is conducive to accelerated plumbing issues that can result in a variety of home damages including water damage, mold, and electrical damage.  A SIMPLE and FREE home damage assessment could save homeowner money and avoid serious distress 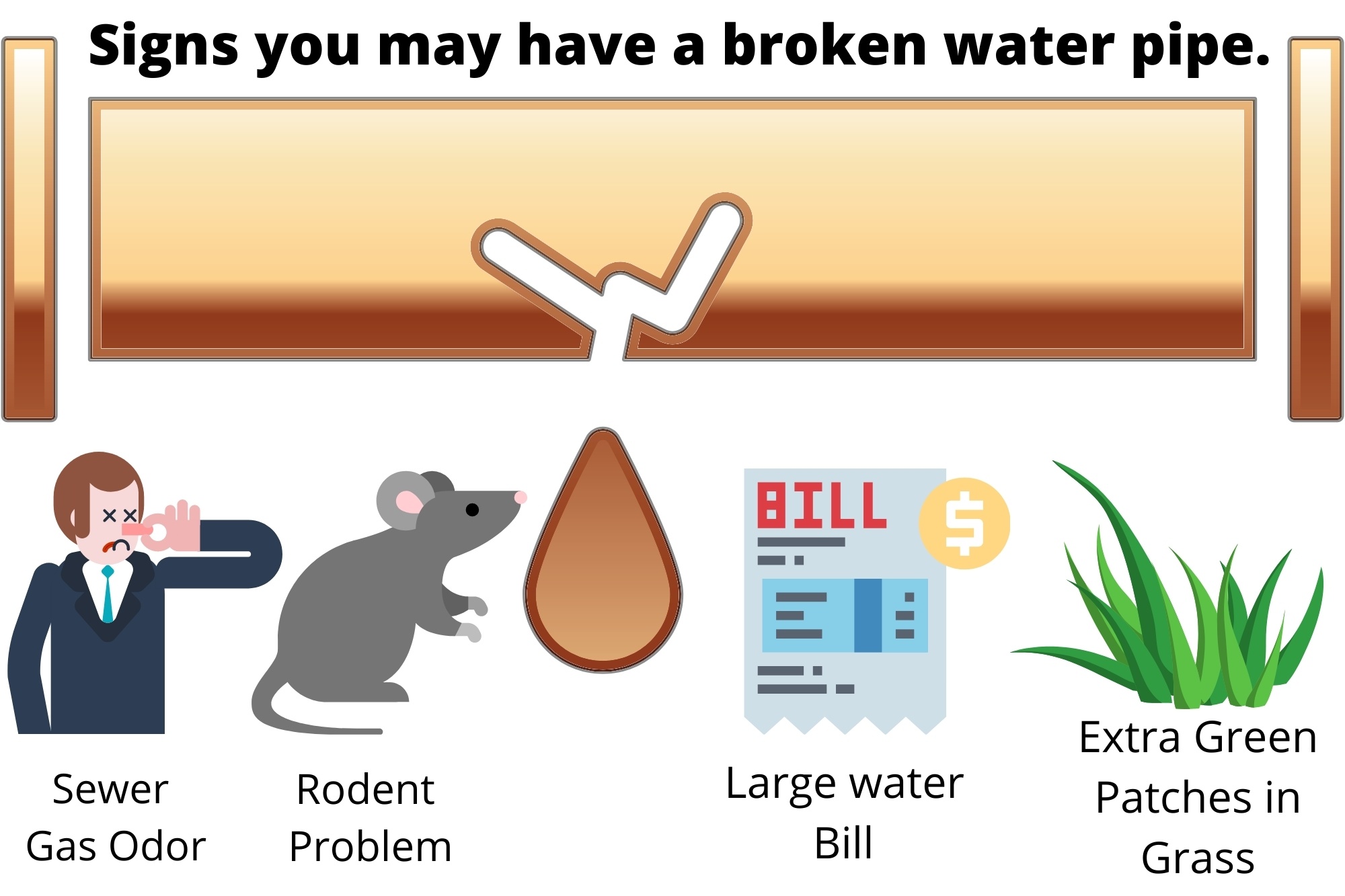 If you have a home in South Florida that is over 25 years old, or if your home was built before 1975, chances are it was built with cast-iron plumbing.   Many years ago homebuilders were using cast-iron pipes because they were considered the best choice for home and office plumbing.  Cast iron pipes are extremely durable and they can withstand high amounts of extreme pressure.  Given these qualities,  cast iron plumbing was considered the standard for many years.  Cast iron water pipes were used throughout entire homes and also buried underground as a way to carry home waste to the towns sewer systems.

After 20 to 30 years, it became apparent that there was a major problem with cast iron plumbing.  The problem was that they rust, not so much on the outside but from the inside.  Because the rust happens inside the pipe, a whole host of problems occur.   First, the rust from inside the pipe will travel with the flowing water and eventually lodge inside the homes faucets, damaging them.  In addition, the water sitting inside the home plumbing would become brown with rust.  After a while it became common  for homeowners to run the water faucets for a while allowing the rust filled water to run out of the pipes – leaving cleaner looking water.  Of course, home occupants are not eager to drink rust colored water.   While running the water until it appears clear,  may make the drinker feel better, there is trouble still serious brewing.

Over time, the inside walls of these rusted cast iron pipes will wear thin until eventually the pipe springs a leak or simply busts from the inside.   Many times when a cast iron pipe breaks, it’s a catastrophic failure that results in a flood.  Other times the leak is small and unnoticed.  Inside a home, this leak could produce water damage that may eventually lead to a home water damage issue or a mold problem.  Read our article on mold damage.

Since these pipes are also used for waste water lines, they are also buried underground.  When an underground waste water pipe breaks, it becomes a huge problem for several reasons.  First the wastewater is underground, which means it could be pooling unnoticed under your home.  The will almost always result in all kind of strange smells.  Naturally mold could develop, making home occupants sick.  Sometimes the cast iron pipe will break under the home’s yard.  While this may feed the grass plenty of rich nutrients, resulting in a lush green patch of lawn, it will eventually cause havoc for the homeowner.   Once homeowners had gotten a dose of all the issues created by cast iron plumbing, it became apparent that a different type of plumbing material had to be used. 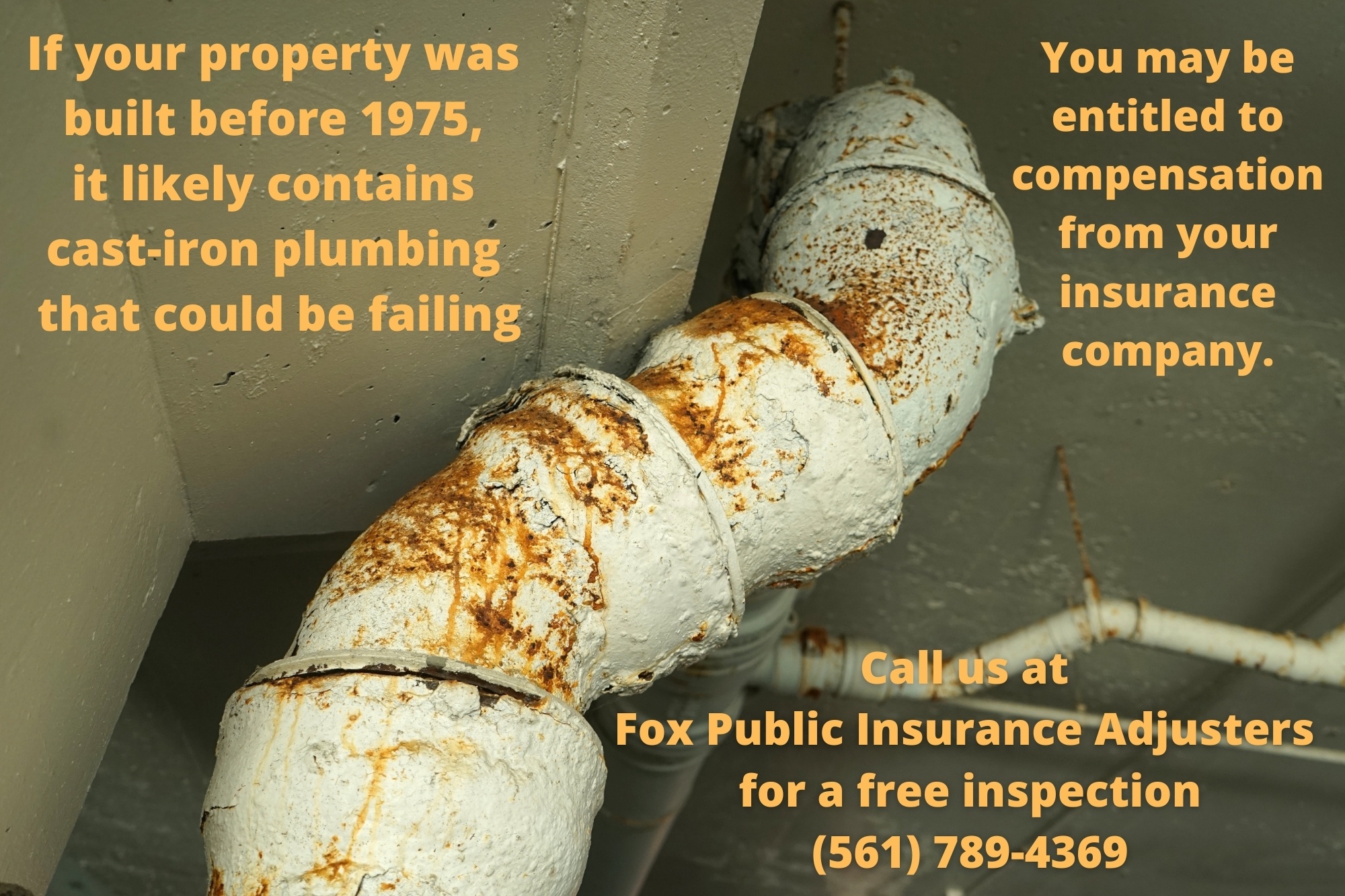 Why should a homeowner call us first?

When a homeowner calls their insurance company, the call usually results in a home inspection by the insurance company’s claims adjuster.  Because the goal of most insurance companies is to make money, their objective is to only fix the visible or current problem. This means if they can’t see internal rust in home plumbing, they won’t include the replacement of the plumbing as part of the settlement. As a Public Adjuster in Palm Beach County, our job is to find all the damage – and potential damage –  that is related to the current issue.  In other words, if a cast iron pipe ruptures as a result of internal rust, the insurance company may only repair the damaged pipe, when the entire home needs to be re-piped.   When we do a home or business inspection, we determine the best course of action based on the homeowners repair needs and not an insurance company’s bottom line.

Before broken waste water pipes cause havoc in your home, there are signs that a problem is brewing.  For example, a broken cast iron waste pipe located underground will allow the waste to fertilize your lawn in a localized spot.   If your lawn has a patch of extra healthy grass, it may be due to the extra nutrients coming from an underground ruptured waste line.

If you happen to smell something strange in certain localized areas of your home or yard, you may smell hydrogen sulfide or methane, which is being produced from a broken waste pipe.  In addition to creating foul smells, broken waste pipes often have holes which are small, but large enough for small rodents or insects to enter, these little creatures can enter your home by traveling through your damaged plumbing.   Another sign you may be facing a home plumbing problem could be seen when viewing your water bill.  Water running uncontrolled through your plumbing will have a large impact on your water bill.  Imagine leaving a faucet partly open 24 hours a day.  That would surely impact your water bill.  Other signs that you may have a compromised cast iron plumbing pipe include warped wood floors, discolored floor tiles, stained or discolored carpet, clogged or slow drains.    For more information on the history and problems associated with cast iron plumbing read this article.  Cast Iron Pipes: What You Can Expect in Older Houses 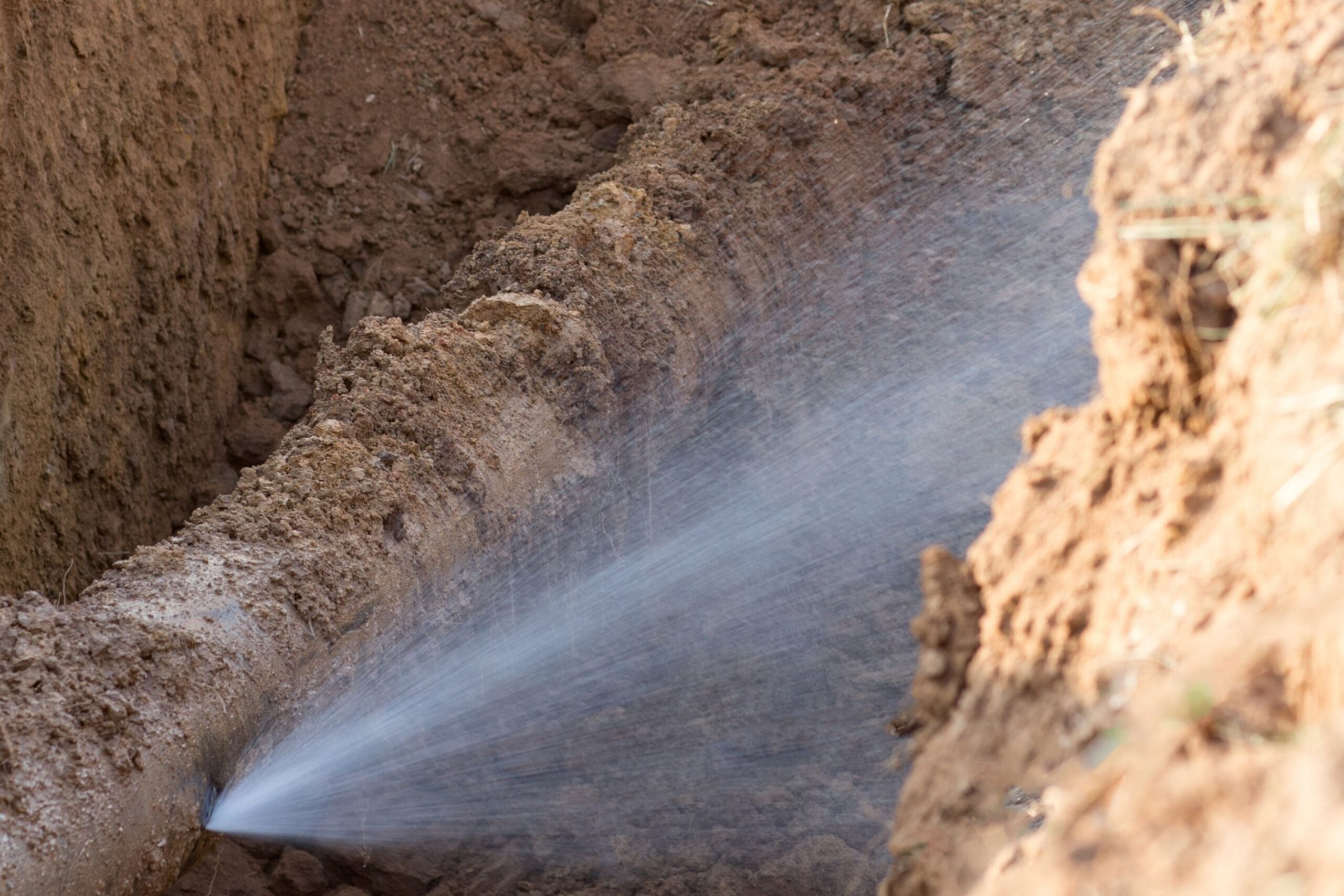 Because South Florida is a moisture-rich environment, home plumbing here is especially vulnerable to corrosion. If you have experienced any of these plumbing damage signs, taking action is the smartest move a homeowner could make.  Having a FREE home inspection will give you piece of mind and could save you lots of money.   Because broken water pipes can wreak havoc in your Palm Beach County home and the damage can be contained behind walls, inside the ceiling, or under the floor and you may not even know about it until the damage is severe!  Call FOX Public Insurance Adjusters at (561) 789-4369 if you suspect you may have a problem with your pipes being compromised. This includes cast iron waste lines that break and leach into the slab and floor above them.  Again, our consultation session is FREE and we do not get paid until you do.