Although Palm Beach Gardens isn’t located directly on the ocean, many hurricanes and large storms have caused a wide range of damage to area homes.

Are you facing a home damage problem.  Don’t mess around with a company insurance adjuster who is unreliable,  Call the best Palm Beach Gardens Public Adjuster at (561) 789-4369

When disaster strikes and you have home damage, there are two options.  One is to call you insurance agent.  For many people, they believe that this is the only option.  However, there is another option.  You don’t have to live with a denied insurance claim or walk away when your insurance agent tells you something stupid like, it’s not worth submitting a claim or if you do your rates will go up if you submit this claim.

The second option, hire a Public Adjuster.  What is a public adjuster?  A public adjuster is an insurance adjuster that does not work for the insurance company.  Public Adjusters are independent and work for the homeowner.  You see at some point in time, a group of people saw a conflict taking place in the home insurance business.   How is it fair that the company that sells the policy, is the same company what decides your home damage claim?  It’s not fair.  Think about it, your home is damages by flood, roof damage, a broken pipe, fire, and the same company that wrote to policy says, Yea, this is nothing, just use a bunch of towels on your water soaked kitchen floor and go away.  At Fox Public Adjusters (561) 789-4369 we have seen this again and again.  The homeowner says ok and tries to wipe to water away.  Then several weeks or months later, the floor starts to pop up, or the seams between the floor boards separate.  When the insurance company is called again the response is, this is a different problem.  This is a normal home age problem or you had bad floor construction.  Just buy a new floor, NO actually, what happened is the water damage, that the homeowner was told to wipe away, soaked under the floor and caused wood rot, or worse yet, Mold.  This all could have been avoided with a call to a public adjuster.  We can’t even begin to tall you, how many floors we have replaced after the insurance company said, no, or claim denied.  Read this article with was written after we served another homeowner:  New floors installed after home water damage.  When this home suffered a HAVC problem the water got every place. while appearing subtle the damage was done.  Look at the pictures.  It took replacing the floors to correct his problem.   This homeowner had some previous experience with home damage so he knew not to wait.  He called us and we got the job done.  Look at the graphic below.  Compare the facts.  Once you do, you will realize that hiring a Palm Beach Gardens public adjuster is the smartest option. 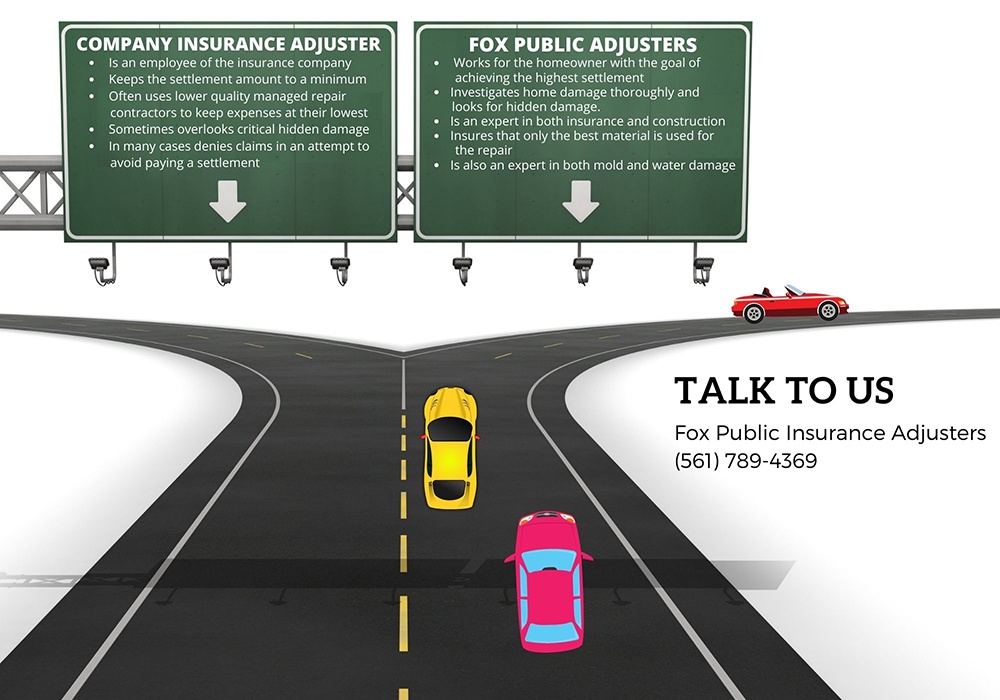 When home damage occurs many homeowners are faced with choosing between calling their insurance agent or calling a Palm Beach Gardens public adjuster.  To determine which is a better solution, a homeowner should consider several factors.  One of those factors is the extent of the home damage.  A small roof leak or a broken plumbing pipe that is caught quickly could easily remedied with a simple repair.  In this case the cost of the repair could be less than your insurance deductible so hiring a public adjuster may not make sense.

When should you call a public adjuster in Palm Beach Gardens or any place in South Florida?

If a homeowner calls a public adjuster, and the public adjuster doesn’t see the need to file an insurance claim they will certainly let the homeowner know.  On the other hand, a roof leak, left unchecked could result in a huge mold issue. We have seen this happen again and again.  A home sustains a small roof leak as a result of a hurricane or storm.   Slowly rainwater seeps into the homes attic through the compromised roof.  Because the leak is so small, the homeowner doesn’t realize there is a leak.  Over time the insulation in the attic soaks up the water keeping the moisture trapped in the ceiling.  After a while mold starts to grow.  It only take 24 to 48 hours for mold to start growing.

A small leak that is unnoticed can easily become a huge problem.

Once a roof leak turns into a mold issue, the story changes.  Most of calls we receive are from homeowners who have had their insurance claims denied as a result of undiscovered mold.   These insurance claims are denied because the insurance company adjuster over looked the water damage, which resulted from the initial roof leak.   Without home construction knowledge many typical insurance adjusters, fail to catch all the home damage. This is because a roof leak in one part of the home could result in rainwater traveling to other parts of a home.  Read: When call a public adjuster first here you will learn how rainwater travels through your home.

Working as a Palm Beach Gardens Public Adjuster, many of the calls we receive are from homeowners who have had their claims denied.

In the aftermath of hurricane or a large storm, contacting your insurance company is often the start the claims process.  After a hurricane or storm, it’s time to determine the extent of the damage to your home, automobiles and landscaping. Then a homeowner can start the claim filing process.  Depending on the hurricane or storm this process can become complicated, for the homeowner who doesn’t understand the insurance process, doing this incorrectly can lead to an underpaid settlement.  Once an insurance settlement is underpaid, it becomes more difficult for a homeowner to recover the true cost of home repair.  In addition, after a hurricane insurance companies will likely be inundated with new insurance claims. The result is too many insurance claims and not enough insurance company adjusters.  This sometimes results in many over worked insurance adjusters, simply wanting to settle their workload of claims quickly.

Home insurance claims, which result from hurricanes, floods and windstorms, are often require special paperwork.  Often there is sometimes plenty of red tape that stands in the way of a homeowner receiving a proper settlement.  Many homeowners in Palm Beach Gardens who have had past experience with home damage, know that hiring a public insurance adjuster is the best way to cut through that red tape, and alleviate the roadblocks that prevent them from receiving the insurance settlement they deserve.  There are lot’s of steps and requirements associated with filing an insurance claim.  For more information on what is needed read this article: US News, all the steps required to file a property insurance claim.  After you read this you may want to call as public adjuster and save yourself a few headaches.

Tricks insurance companies play to save money, and how a Palm Beach Gardens Public Adjuster could stop these tricks.

Another trick insurance companies play is to deny a claim by either a formal denial or by giving the homeowner a friendly verbal denial.  In a verbal denial the insurance adjuster simply tells the homeowner the repair cost is going to be less than the cost if the deductible, or they telling the homeowner the claim is not valid.  Example, you roof is too old, we won’t cover an old roof.  When this has happened it usually only takes one call to a public adjuster the have the claim move forward.

By hiring a Public Adjuster in Palm Beach Gardens you are no longer at the mercy of the insurance company.

First, some insurance adjusters only look for the visible damage and turn a blind eye to the hidden damage.  When an insurance agent tells the homeowner that it’s not worth filing a claim it’s called a verbal denial.  Your agent may tell the homeowner rates will rise if you file this claim.   It’s more cost effective to pay for the repair out of pocket.  Sometimes an insurance adjuster may treat a claim as a partial repair.  In the case of roof damage, an insurance company may provide a settlement for several localized repairs.  However, the entire roof needs to be replaced.  In some cases property owners have experienced claim delays, verbal denials disputes and mounds of endless paperwork, all which cause homeowners extra stress.  At some point the homeowner just wants the process to end, and the result is an underpaid settlement.

By hiring a Palm Beach Gardens public adjuster you don’t need to worry about making a mistake.  Some homeowners dig themselves into a deeper hole by saying the wrong thing.  Many homeowners have ruining their chance of receiving a proper settlement by giving too much info.  As a public adjuster in Palm Beach Gardens, we are familiar with all the required paperwork.  It’s our job to ensure a homeowner receives a proper settlement.  If your insurance claim has been denied, we have to authority to re-open your claim.  We will also correct any mistakes made by the insurance companies over worked adjuster. 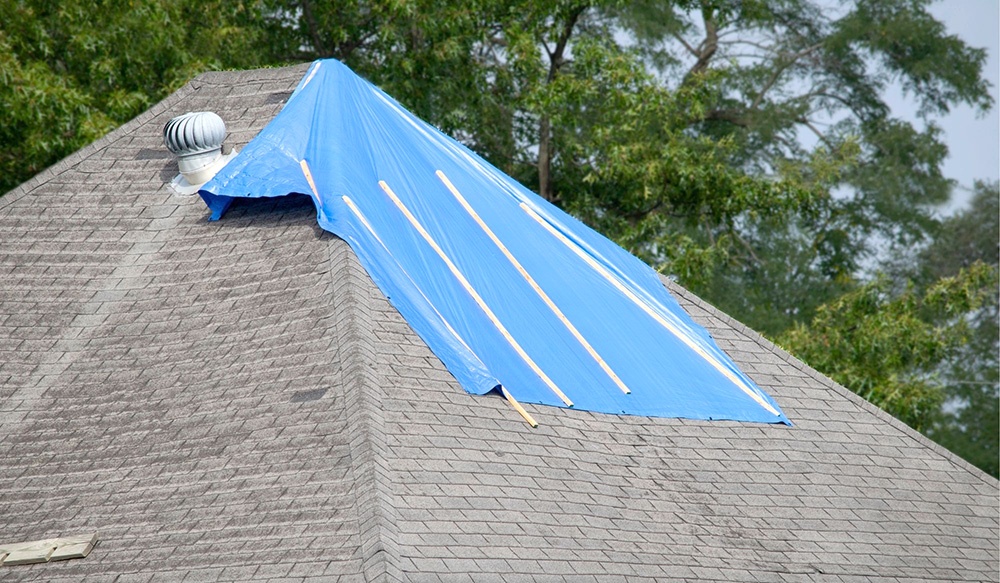 When roof damage happens, from a storm, hurricane, lighting or any other unexpected event, one call to Fox Public Adjusters is you best choice.  Do you suspect you have a roof leak, don’t waste time waiting for your company insurance agent to send an adjuster, call us at  (561) 789-4369

More about roof damage claims,  There are many different types of policy’s and many include a different set of terms.  Some policies cover, sudden damage, others cover accidental damage, and many include damage from wind, hail, fire, or hurricanes. In a home damage situation,  It’s really important to know what type of coverage you have.  Most people have no idea what is included in their damage policy.  Because so many homeowners have no idea what is covered and what is not covered, they are shocked when they learn that their claim has been denied.  At Fox Public Adjusters, we are not surprised.  We receive calls almost every day from Palm Beach Garden homeowners have have found that their claim has been denied.  Had the reached out to a public adjuster from the start, they may not have had to worry about a denied claim.  Before we submit a claim, we will first review your policy, then look for any possible reasons why your claim could be denied.  If we find a problem we will take the needed action t0 circumvent any potential problems.  Once a claim has been denied it’s more difficult for a homeowner to fight with for a proper settlement.  Don’t go into a home damage situation alone.  Call us and let us get you the settlement you are entitled to.

Don’t let a damaged roof impact your damage claim or shorted the life of your roof.

Once a roof has been damaged the lifespan of the roof is shortened, this is especially true if the roof is damages and not repaired to last years.  In the came of company insurance adjusters, roof damage is sometime that gets fixed fast, and with minimum cost to the company.  However, for a public adjuster the goal is to repair or replace the damage so that it’s as good as new.  Saving insurance company money is not our goal.  At Fox Public Adjusters, our goal is the get our homeowners the best settlement possible, which insuring that the damage is repaired completely.